The OnSite Rail Department at Heathrow is now operational.

The Team has already upgraded track drainage between Swindon and Kemble, as well as Badminton and has also strengthened a Culvert in Swindon, enabling track lowering to accommodate mainline trains.

OnSite Rail has been involved in a large-scale project in East Sussex. During construction of a sheet pile retaining wall, a 1200mm culvert was breached at 4m by one of the sheet piles. The pile was removed, but the culvert had suffered damage and the crown was failing. A second culvert breach occurred when a ground anchor struck the top of the culvert, causing a partial collapse requiring two repairs.

The difficulty with carrying out any repair was that conventional excavation was simply not possible because the culvert is very deep (14m).  An added complication was that man entry was rendered unsafe due to the damage to the sewer.

The solution agreed upon by OnSite Rail and the client was to pipe-jack an 1100mm diameter sacrificial steel pipe through the culvert to temporarily support the damaged areas. Debris from the collapses was then cleared manually within the safe confines of the steel pipe. After both breaches were passed and the debris removed, the jacking was completed and the annulus was grouted, leaving the structure solid.

Finally, a fully structural UV liner was installed, creating a culvert that remains structurally safe – even after the sacrificial steel lining pipe has eroded away completely.

OnSite is one of the first contractors to include Network Rail’s Lifesaving Rules on our Hi-Viz jackets – which supports the Onsite ‘Safety Matters’ initiative. 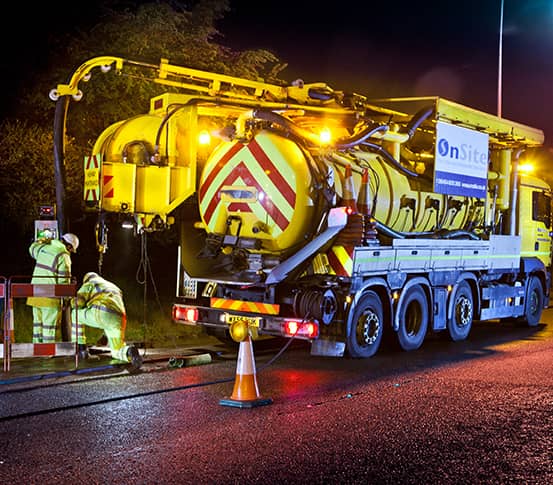 OnSite Rail is proud to support the efforts of Queen Mary’s Hospital in Sidcup to raise over £4000 for Macmillan Cancer Support.