The lock gates had come to the end of their working life and need to be replaced. CRT’s plan was to dam off the lock using stop planks, remove the old gates and replace with the new gates which were located close by on a barge awaiting installation.

However prior to installation Graham Smith, the CRT Construction Supervisor discovered that the stop plank seal was rotten and unable to affect a seal to dam off the lock.

On a tight schedule, an alternative solution was required and an emergency call was made to OnSite Central, who have worked with CRT on numerous projects.

An in-water survey was immediately undertaken to establish whether OnSite could assist CRT in finding a solution.

It soon became apparent that the main issues to overcome were:

The survey established that OnSite’s PortaDam (portable, temporary dam system) could be utilised as a solution for CRT and to keep the project on time, OnSite were able to redirect one of their PortaDam installation teams, the following week, to accommodate CRT’s schedule.

The PortaDam was installed within the tight timescales allowing CRT to fit the new seal and stop planks before being removed one week later. The new lock gates were then replaced and the locks were opened to the public within a two week period from the initial PortaDam installation.

OnSite have a reputation for solving waterways related problems and demonstrated once again that they will ‘pull out all the stops’ when called up on.

“The unforeseen issue of the failed stop plank timber had the potential to cancel the £100k works which had already had significant press coverage promoting the world’s first silent disco in the bottom of a lock, the reputational damage to the Trust would be significant if this didn’t happen.

Thankfully the swift reaction and support provided by OnSite enabled the works to continue with only a slight extension to our delivery programme. The open weekend, silent disco and all works have been a success.” 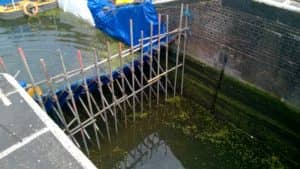 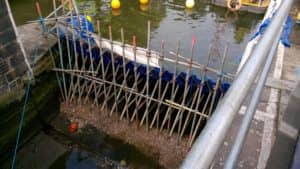 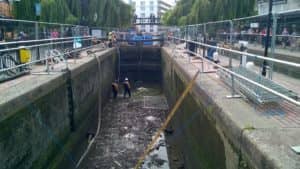