OnSite Rail was asked to carry out remedial repairs to a brick drainage culvert at Acton Town Station platform. The actual area needing repair ran directly under the Piccadilly Line to Heathrow in close proximity to a set of points in constant use.

The proposed method was to install a Cured-In-Place Pipe (CIPP) solution using a UV liner. However, the CIPP proposal had to be abandoned when the pre-UV lining CCTV survey undertaken in February 2016 revealed that the deformation had exceeded 30% of the original 600mm diameter culvert, making CIPP no longer suitable for the application.

Since the Heathrow Rail Line is extremely busy, excavation was simply not an option. In addition, the timescales involved to complete the works were extremely tight; just two weeks!

OnSite’s Head of Rail Services, James Sargeant immediately attended site upon being informed that CIPP would not be an option. James soon established that Pipe Jacking would be the most viable solution.

Site Engineer, Alex Duncan then prepared site-specific Method Statements, Risk Assessments and Safe Systems of Work for the Pipe Jacking solution. These documents were then provided to OnSite’s client, Balfour Beatty for review and approval.

The ‘Pipe Jacking’ technique was developed more than 50 years ago. The technology pushes pipes through the ground using a hydraulic jack. This solution enabled the new steel pipe to be positioned without further exacerbating the fracture in the old waste water line.

In order to provide strength, without compromising the set of points that ran above the fractured section of drainage pipeline, a new 400mm diameter steel pipe was jacked into the existing 600mm diameter culvert in 1.0m sections.

Each pipe segment was jacked-in in sequence and flash butt welded at the joint. The lining process requires each segment to be welded before another segment could be added.

Lined in just over 24 hours

This weld-jack process was repeated at a rate of three segments an hour. The pipe jacking started on Saturday at 11:45 hours at the critical run of 66m with severe deformation, with the final pipe being jacked into place by Sunday 12:15 hours.

Due to the amount of time available at the weekend possession, another 19.0m of pipe out of the 28.4m were jacked in. The remaining 9.4m of liner was jacked-in in Engineering Hours post possession.

Finally the annulus between the brick and steel was filled with grout. Grouting seals any voids and further increases the overall strength of the remediated waste water culvert.

The works were completed without any accidents or incidents. This is a significant piece of critical works that could potentially cost so much more if an open cut method had been adopted. The nondig approach negated temporary point removal, making a significant saving. More importantly, the risk of a drain collapsing under 44 Points which serve the busy Westbound Fast Piccadilly Line to Heathrow had been eliminated. 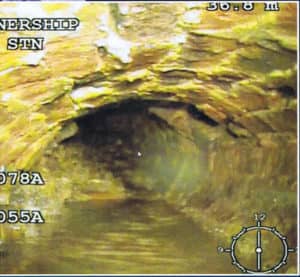 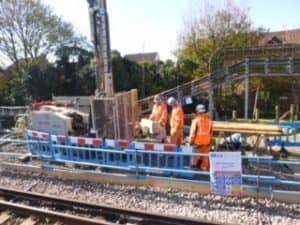 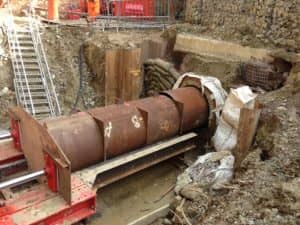 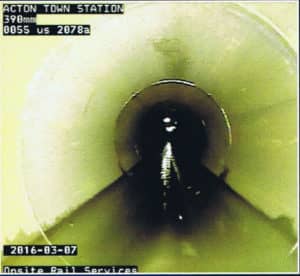